e-Radio Inc. was in the spotlight at the 2015 Consumer Electronics Show (CES) in Las Vegas where the Consumer Electronics Association named the company’s Prices to Devices (P2D™) 2045 module a 2015 CES Innovations Awards Honoree in the Tech For A Better World product category. Products entered in this prestigious awards program are judged by a panel of independent industrial designers, engineers and trade media to honor outstanding design and engineering in cutting-edge consumer electronic products.

Honorees were previewed for the media at CES Unveiled Las Vegas, Mandalay Bay Hotel, January 4th. Then, from January 6th through 9th , senior members of the e-Radio team, in collaboration with project partner A. O. Smith Corporation and Nevada Public Radio's KNPR-FM, offered real-time live demonstrations of its patented P2D™ 2045 module at its exhibit booth in the Sands Expo Conference Center. Visitors were invited to push the "activate" button to see how e-Radio technology could materially improve the efficiency of the grid using FM RDS to reach over 300 million people and their devices in about 2 seconds. By sending real time electricity pricing directly to appliances, it enables them to buy their energy more intelligently. On-site response was very encouraging with high traffic volume being generated throughout the show. With over 200 demonstrations conducted, e-Radio is acting on the many new opportunities that have presented themselves.

Following the well-attended CES Las Vegas demonstrations, e-Radio USA Inc. and its project partner A. O. Smith will be offering demos of P2D™ 2045 module on site at DistribuTECH, February 3rd-5th 2015 in San Diego, California. DistribuTECH is the largest U.S. event of its kind - covering the utility industry from end-to-end with 10,000 attendees and more than 480 exhibitors. In past years, San Diego has delivered the event's highest-ever attendance numbers and the 2015 event should be no exception. 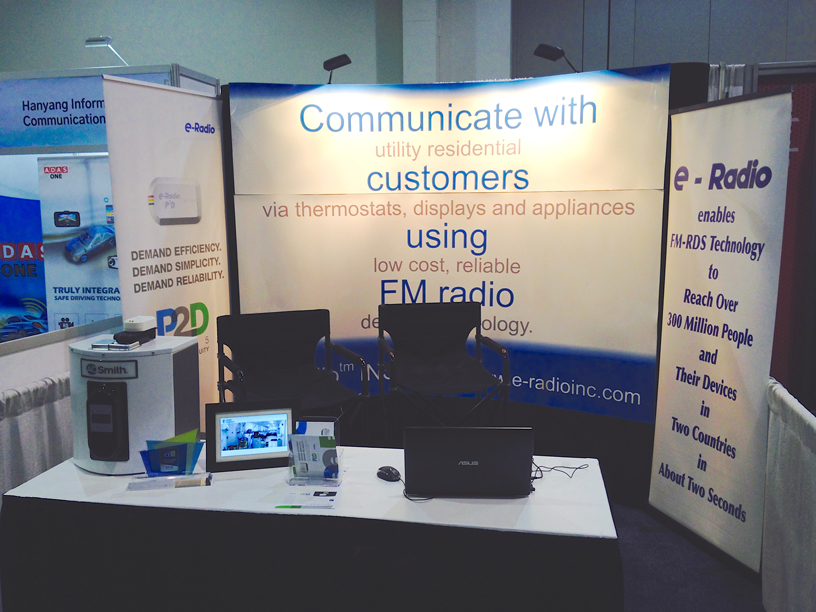